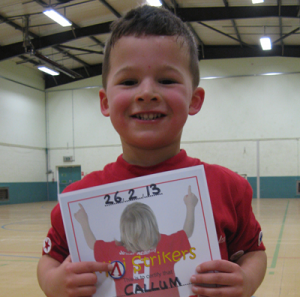 Callum started at Striker Academy when he was just three years old. Coach Ij could see immediately that Callum had a gift for football and a passion for learning. In fact by dads own admission, Callum is ‘mad about football’. Even at the tender age of three Callum had a very good understanding of the game.

The main issue facing Callum was to help him use his skills at the right time and to encourage him to learn new skills and use them in matches (played at the end of every training session).

Coach quickly promoted Callum to the Intermediate/Advanced class where he got the opportunity to train with five, six and seven year old’s. He learnt lots of new skills which he could confidently try out and use against opponents in matches and any challenge games played in training, like the 1v1s.

At 4 years old Callum was scouted by Manchester City where he trained twice weekly at the famous Platt Lane Academy. At age nine Callum  signed his very first contract for Everton FC.

As you would expect, mum Cathy and dad Steve are very proud of him but are sensibly keeping both feet firmly on the ground!

Callum trained in our award winning Mini Strikers class. More information about these classes and venues are available here. If we have spaces you can simply book straight on or apply for a free trial.